Heavy commercial ships carrying everything from oil to fly ash to pesticides ploughs through the ecologically fragile mangroves. The danger is very real 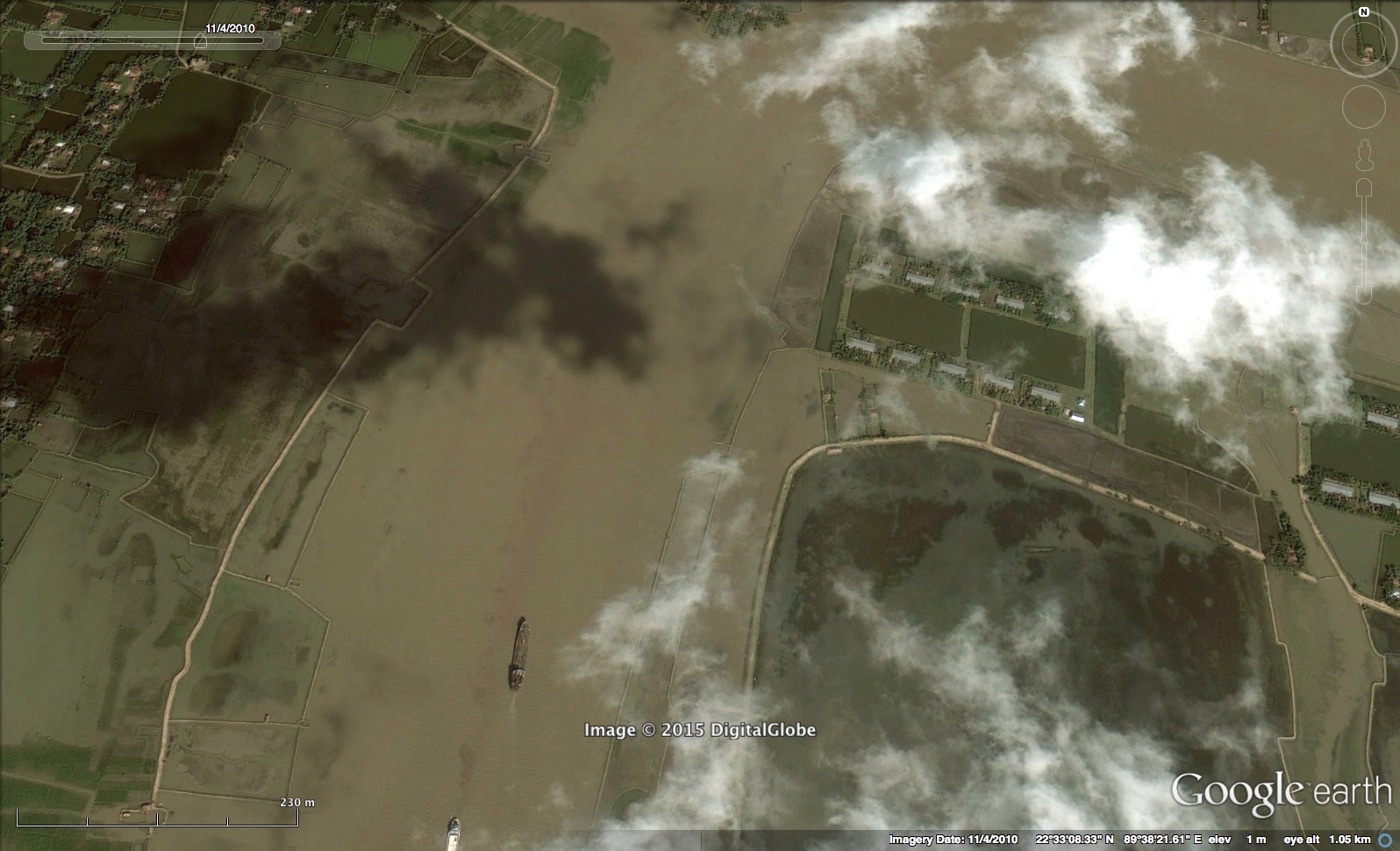 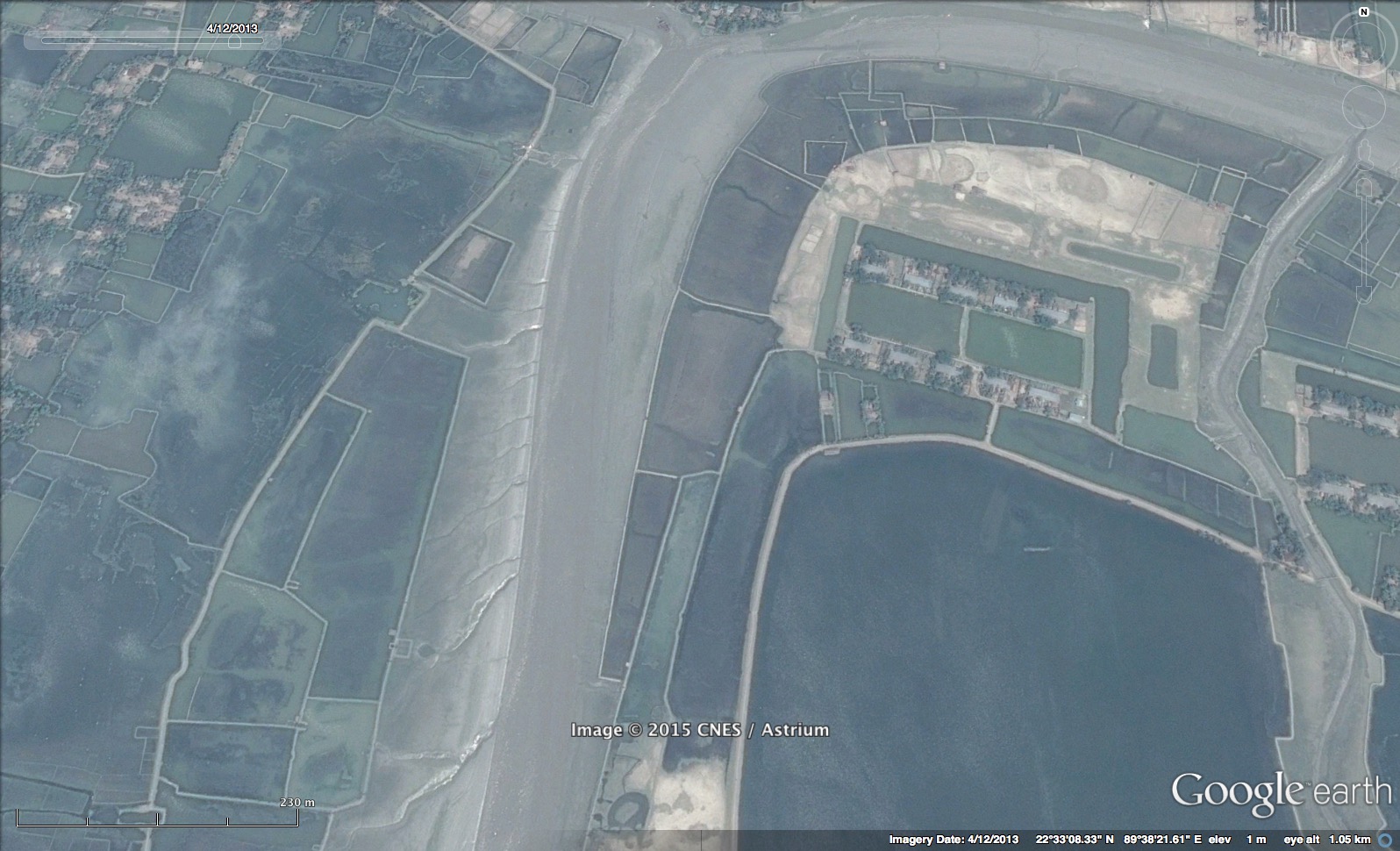 As if on cue, local politicos and goons bought up the area by the river and carved out lucrative shrimp farms. The government built embankments to protect these interests. As a result, the silt, which normally would have deposited on the banks creating and beefing up land masses, had nowhere to go.

It sat in the river way and in a short few years, the Ghasiakhali route silted up (use the slider in the image above to see the difference in the river in 3 years).

With Ghasiakhali choked up with shrimp farms, the ships had to find another route to the ports of Chittagong and to Morrelganj.

Going the long way around would be too heavy on business wallets. In what seems apparent in the aftermath of the oil-spill in the Sundarbans, shipping and business interests in the government have a stranglehold on decisions. They regularly swing the vane away from any environmental concerns.

Ergo, since 2011, heavy hazardous cargo has been waved right through the nearest alternative rivers — the Sela and the Passur — that cleave the Sundarbans. Over two hundred vessels of varying sizes ply through the forest everyday.

Did the oil-spill change anything?

The government banned oil tankers through the forest in the aftermath of the oil spill, but here’s the rub.

The Southern Star-7, the vessel that spilled the oil into the Sundarbans, was no certified oil tanker. As a signatory to the International Maritime Organization’s mandate that any oil tanker should be double bottomed and double hulled, Bangladesh is supposed to comply. The Southern Star -7 was neither double bottomed nor double hulled, and yet was found to be carrying oil.

It was carrying “modified cargo,” allowed passage by someone likely turning a blind eye and stretching out an itchy palm.

No one knows exactly what cargo may still be plying through the Sundarbans.

With the proposed thermal power plant set to come up a few kilometers upriver from the mouth of the Sundarbans, soon coal will need to be imported to the area.

Without any progress in the dredging the Ghasiakhali, traffic through the eco-sensitive mangroves is only set to increase.

All the drinking water in the world will fit in a cube that can sit over the city of Bangalore. And in this industrial age, everyone wants a share of aquifers, rivers, lakes, and wetlands. Voices get shriller and stakes rise ever higher should a river cross international boundaries. Add to all this, the unpredictability of weather patterns in the age of climate change.

The murky matter of an oil spill in the largest unbroken stand of mangroves in the world and the murkier cover-up. A story from the Sundarbans in Bangladesh

Don’t Touch. Don’t Ingest. Don’t Inhale!
No one told the fishermen of the three hazards of heavy fuel oil. Unknowing, they did all three

A UN team surveyed the Sundarbans oil spill and spoke no evil. An independent study details the havoc that was, and warns of the doom to follow

Travel along the Sela River from Mongla to the Bay of Bengal. Filmed, written, and shot over the monsoon and winter of 2014, this is a map of sights, sounds, and stories from the 'Beautiful Forest'